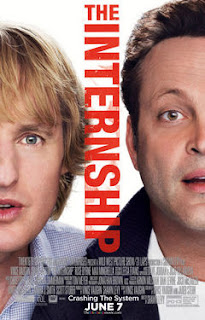 SYNOPSIS: Two salesmen whose careers have been torpedoed by the digital age find their way into a coveted internship at Google, where they must compete with a group of young, tech-savvy geniuses for a shot at employment.

REVIEW: Real Steel and Date Night director Shawn Levy has run the gamut of action/adventure and comedy. With the Vince Vaughn and the Jared Stern (The Watch) written film, The Internship takes on generational differences, the dwindling economic climate, and the high risk/high reward internship game at one of the leading technology firms, the film tries to be both funny and relevant. 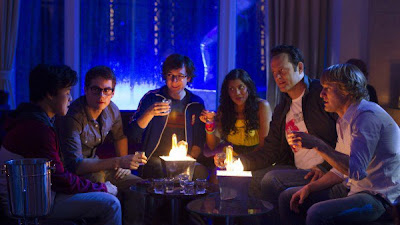 Bill (Vince Vaughn, The Watch) and Nick (Owen Wilson, Midnight in Paris) are watch salesman. During a business dinner, the client informs the two of them that their business has folded. 20 years footsoldier and daily "grinders", they realize that they need to figure out what to do next. With bills piling up and disgruntled girlfriends, Bill has a crazy plan for him and Nick to go after an internship program at Google. When they arrive for orientation, the duo discover that not only are they twice as old as everyone else, they have no technical skills, and are way out of touch with how the current world works. When nobody wants to pair with them for the summer and the schedule of challenges that will decide what interning team will be guaranteed a job at Google, Bill and Nick are put together with the "outlanders" also couldn't get partnered up. Under the tutelage of four year veteran Lile (Josh Brener) Nick and Bill team up with Neha (Tiya Sircar, Friends with Benefits), Stuart (Dylan O'Brien, The First Time), and Yo-Yo (Tobit Raphael), three Nooglers who are is just as much of misfits as they are, but in different ways. Billy struggles to learn something other than "beat the street" sales, Nick struggles to find a little bit of love with Googler Dana (Rose Byrne, The Place Beyond the Pines). They struggle to get along with a team that knows they have no marketable skills to help them in challenges, and knows that their prospects of getting the jobs given to the top team at the end of the summer get dimmer and dimmer. Can these misfits come together and actually act like a team, or is the entire group destined to not get in at this from your company called Google?

Vince Vaughn and Owen Wilson re-team for this adventure in job hunting. Vince Vaughn has worked with both the Wilson brothers, and has a perfect chemistry with Owen as was evident in their performances in Wedding Crashers. Wilson continues with his 'ah shucks', 'the world is still a bright place' mentality, infusing his character with an infectious endless optimism. Vince Vaughn, the work horse, has plenty of enthusiasm – given sometimes his enthusiasm is ineffective – to bring his team together. Their characters face two nemesis. The first is senior manager Mr. Chetty (Aasif Mandvi, Premium Rush) who seems to have it in for the Billy and Nick as soon as he sees them. The second is a rival team leader (Max Minghella, The Darkest Hour) who chooses the best of the intern pool in order to guarantee his place at the company. Nick and Bill's team is filled with the typical quirky members – including slacker Stuart doesn't seem to care about anyone or anything, a homeschooled Asian teenager Yo-Yo who pinches his eyebrow whenever he feels inferior, and a sexually charged, boisterous Neha who seems to gravitate towards the crude. Vaughn's Billy and Wilson's Nick have a heckuva time trying to persuade these misfits to work together long enough to possibly win the summer intern program.

As expected, The Internship is cute and funny. It's what you would expect from a Vince Vaughn/Owen Wilson collaboration comedy, without all of the Wedding Crashers-esque sex and language. There still is a little bit of sex and language, but toned down a little bit you for sake of the kids. The best parts of the film, in terms of comedy, is watching Billy and Nick swim in the pool where they know nothing about technology, how search engines work, how to program, and how to deal with young kids who in a different generation who have not grown up on the "hard work equals success" mentality.

The film is timely in that kids coming out of college today are not guaranteed a job and long career veterans are being laid off and high numbers. Two separate generations find themselves in the same situation. Nick and Bill think they could just persevere and show sheer willpower and sweat equity. The younger generation, as smart and enthusiastic as they are, find themselves with few prospects and fewer job opportunities. It's a relevant statement to how today's society and economy looks, but Vaughn, Wilson, and crew do a good job of making it humorous anyway. Some of the situations are hysterical, including a challenge of Quidditch where athletic, but mismatched Nick and Bill have no clue how to play the game.

There are a couple missed opportunities. To keeping the story moving along, some of the angst that Neha, Lile, Stuart, and Yo-Yo is overcome a little too quickly and efficiently. The rival Noogler, played by Max Minghella, is altogether snarky, self-centered, egoticical douche but he seems to be an afterthought at times. Even Nick's sweet pursuit of Dana is a little too light and too sweet to be fulfilling.

Thank you comedy, The Internship will make you laugh as well as give you a taste of an economic message that we can all relate to in someway. Vaughn and Wilson are a great comedic team, with a familiar and solid chemistry infections enough to make you want to go check the film out. Feeling lucky?
Posted by CHUCK I. at 7:54 PM