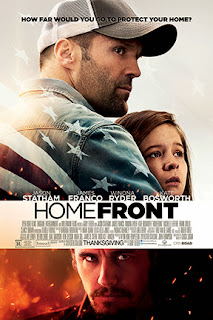 
SYNOPSIS: A former DEA agent moves his daughter to a quiet town, where he soon tangles with a local meth druglord.

REVIEW: Runaway Jury director Gary Fielder is no stranger to suspense or action, spending a lot of time directing action-oriented episodes for The Shield and Life on Mars. Now, with a script from none other than Sly Stallone (The Expendables 2) Fielder combines suspense and action together for a Thanksgiving weekend release. 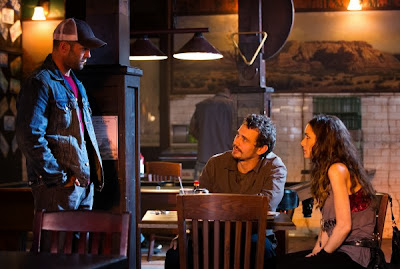 Phil broker (Jason Statham, Parker) leaves the DEA after an undercover assignment goes sideways. Retiring to Rayville, Louisiana with his 10-year-old daughter Maddy (Izabela Vidovic), he tries to lead a normal life. When Maddy defends herself from a bully at school, it sets off a chain reaction of violence and revenge that starts with the boy's mother Cassie (Kate Bosworth, Superman Returns) and father Jimmy (Marcus Hester, Looper) before escalating to the mother's meth drug lord brother Morgan 'Gator' Bodice (James Franco, This is the End). When Gator learns of Phil's past life involving the leader of the biker gang The Outcasts, he tries to secure expansion opportunities by serving up Phil's location using his girlfriend Sheryl (Winona Ryder, Star Trek) as the go between.

From a story by Chuck Logan and adapted to the screen by the one and only Sylvester Stallone, Homefront is prototypical action flick. The protagonist is a capable ex-military, ex-agent who is just trying to leave his past behind and lead a normal life with his family. He tries to be a good man and devoted father, but his training and sense of right and wrong put him in the middle of circumstances that force him to take action to protect those he loves.

While not original in the action genre, the movie does bring some fresh life to it. Jason Statham is always fun to watch as an action hero, up there with Bruce Willis and Stallone. He has an easy way about him that makes him a good character for the forced upon vigilante while knowing how to kick some serious ass when he needs to. The choreography and action sequences illicit oohs and ahhs. Statham has great chemistry with his on-screen daughter played by newcomer Izabela Vidovic, making the duo very likable as a family unit. But as good as Jason Statham's presence and physicality are, it still would be nothing without a serious threat and villain.

James Franco, as the meth lord nicknamed Gator, puts a good performance as a ruthless meth cooker and brother trying to do right by his strung out sister. When Gator finds an opportunity to expand his business and change his own life at Phil Broker's expense, he jumps at the chance. Gator is only one of the villains that make this movie so good. Winona Ryder's Cheryl, ex-biker groupie and current Gator drug partner, seems only concerned about her own preservation. Trained killer and biker Cyrus, played by Frank Grillo (Zero Dark Thirty), is sent to deal with the Phil Broker loose end. As a collective this group of deviants could, at any moment, prove more than a match for Statham's character.

Homefront is a good blend of family bonding and villain pounding. Most of it may be a little cliché but Franco, Statham, Ryder and Grillo makes for a action and popcorn lovers spectacle, especially after stuffing oneself with turkey and stuffing.
Posted by CHUCK I. at 8:26 AM