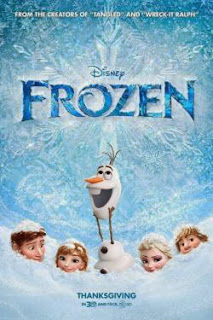 
SYNOPSIS:  Fearless optimist Anna teams up with Kristoff in an epic journey, encountering Everest-like conditions, and a hilarious snowman named Olaf in a race to find Anna's sister Elsa, whose icy powers have trapped the kingdom in eternal winter.

Elsa (Idina Menzel. Enchanted) and Anna (Kristen Bell, Hit and Run) are princesses in the kingdom of Arendelle. Anna loves it when her sister sneaks out of her room at night to makes snowmen with her. The only difference is that Elsa has magic that can create ice, snow and wintery weather. When an accident forces the king to take Elsa and Anna to a group of mystical rock trolls, they heal Anna and advise the king to have Elsa get control of her powers. Shut away from the rest the kingdom, Elsa lives a lonely life in fear of the powers inside her. Years later on the day of Elsa's royal coronation, she accidentally sets in motion an eternal freeze that endangers the kingdom and her people. Anna must help her sister using ice cutter Kristoff (Jonathan Groff, The Conspirator), his reindeer Sven, and an enchanted snowman named Olaf (Josh Gad, The Internship). Will Anna and her new friends reach Elsa in time to reverse what she has done, or will Arendelle continue to suffer the forever winter?

From the Walt Disney Animation Studios, Frozen is a CGI spectacle without the use of Pixar Studios. Following more in the footsteps of classic Disney animated films like Snow White and the Seven Dwarves and the more recent Tangled, Frozen is filled with song, drama, heart and laughs. You never hear Woody or Buzz Lightyear break into song at a moments notice. Once you settle in to the musical quality of the film, you are transported back to those earlier Walt Disney classics coupled with the enjoyment of state-of-the-art CGI animation.

As with most Walt Disney animations, tragic events put in motion an adventure of enchanted proportions. With lost parents, estranged sisters, and blessed magic turned into a curse, from the tragedy comes drama, adventure, and comic hijinks. With ice queens and kingdoms in jeopardy, Anna holds hope in her hearts that she can undo everything that Elsa been done. Helping Anna is Kristoff, his endearing and funny reindeer companion Sven, and a hilarious ice snowman named Olaf. Similar to Tangled, Sven says more with a snort and a raised eyebrow then with words. Everything that the snowman Olaf does, from words to deeds, will keep you laughing. And while Kristoff does not want to get involved he finds himself helping anyway.

The music is beautiful, the arts and scenery of the animation is gorgeous telling a story all its own, and the characters are likable and worthy of rooting for. From a great story with hearts, action and drama, Frozen is a delight for kids young and old. Not too scary for the young ones, Frozen still boasts an epic snow monster that chases Anna and her friends off a mountain. Otherwise it's good wholesome fun and fret for everyone.

Coming from Disney, you expect great storytelling and wonderful animation. Rebounding from the less-than-well received Pixar's Planes earlier this year, Frozen does not slip or falter in its attempt to thaw your hearts and keep you warm from the cold.
Posted by CHUCK I. at 6:48 PM