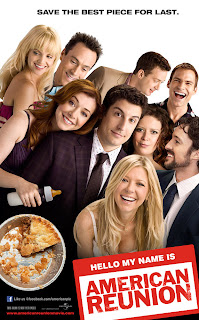 SYNOPSIS: Jim, Michelle, Stifler, and the rest of their friends get together in East Great Falls, Michigan under the guise of a high school reunion to reconnect with old friends, and reignite failing romance.

REVIEW: Hayden Schlossberg and Jon Hurwitz, writers and directors of the Harold & Kumar franchise - yes, it is now a franchise, especially with a sequel, a video short, and a 3D Christmas movie - take their slice out of another franchise pie, the American Pie films. Thirteen years after their graduation, a high school reunion brings back Jim, Oz, Kevin, Stifler, Finch, and the rest of the gang to where it all happened at band camp one summer in East Great Falls, Michigan. 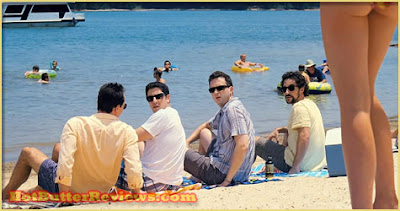 Now married, Jim (Jason Biggs, My Best Friend's Girl) and Michelle (Alyson Hannigan, How I Met Your Mother) try to survive the pitfalls of raising a two-year-old, finding tried and true ways to take care of 'business', usually without one another. When Memorial Day weekend approaches with a call for a thirteen year high school reunion back in their home town of East Great Falls, Jim looks to reconnect with his high school buddies Oz (Chris Klein, We Were Soldiers), Finch (Eddie Kaye Thomas, Nick and Norah's Infinite Playlist) and Kevin (Thomas Ian Nicholas, Delivering the Goods). As they reminiscence about their youth, hapless intern Stifler (Seann Williams Scott, Role Models) crashes the stroll down memory lane and tries to steer them into adolescent hi jinks.

In American Reunion, everyone in the gang finds themselves at a point in their third decade that they did not think they would be. Jim and Michelle find themselves in a sexual funk since the birth of their son. Kevin is a cooking, cleaning, watching 'Gossip Girls' husband in search of a weekend with the guys. Oz, on the way to be a star athlete, ended up behind a sports desk and a segment anchor and on the dance floor as a contestant on a celebrity dance show. Finch has traveled the world and experienced adventure that the others only dream of. And Stifler gets a job at an accounting firm to appease his mom, still oogling the girls in the office as if sexual harassment has not made it to the firms HR department.

The very first hilariously awkward sex scene with Jim, Michelle, a laptop and a bathtub sets the stage for the rest of the film. The writer/directors weave a tapestry of past and present, using moments and characters from the earlier films, plus new characters and funny situations to drive a funny film. Almost every major and minor character from American Pie, American Pie 2, and American Wedding pops up in one fashion or another. Musical instruments make a return, heavily awkward chats about sex occur between Jim and Jim's Dad (Eugene Levy, A Mighty Wind), and sexual advances lead to knocked out teenage girls. All told, laughter shall be had for the diehard Pie fans and newly initiated alike.

The reason why the American Pie series of films (barring the American Pie Presents: versions) works as a raunchy, sexified romp is partially because the underlying story is a a little more than a thread-bare reason to get laid. In American Reunion, Levenstein and crew realize that they are not high schoolers anymore, and have more adult concerns to worry about. The relationships they thought were complicated during their teen years are replaced by more complex relationships as young thirty-somethings. They see the teenage girls as sluttier and boys as less mature than they remembered 'in our day'. And anyone over thirty will know that 'in our day' is just code for 'getting older'. But as more things change, the more they really stay the same, just become bigger and more intricate.

American Reunion should delight the movie-going crowd that grew up with the series from original theatrical releases or watched the earlier films on DVD or cable. And if this is your first randy step into East Great Falls you will laugh and have a good time anyway. You may miss out on some of the earlier film references or characters cameos if unfamiliar with the series, but there is no reason that American Reunion will disappoint.
WORTH: Matinee or DVD