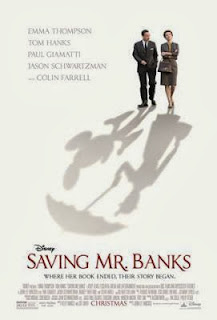 
SYNOPSIS:  Author P. L. Travers reflects on her difficult childhood while meeting with filmmaker Walt Disney during production for the adaptation of her novel, Mary Poppins.

REVIEW: The Blind Side writer/director John Lee Hancock flies in with a talking umbrella to uncover how Mary Poppins finally came to the big screen. Written by Sue Smith and Kelly Marcel, and based on actual recordings kept by Walt Disney Studios, this mouse's tale tells more than just how Mary Poppins came to life. 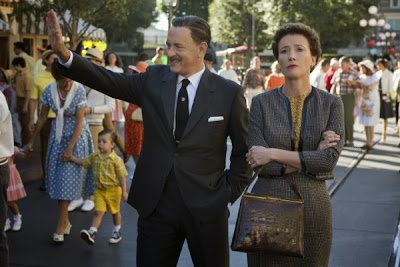 P.L. Travers (Emma Thompson, Beautiful Creatures), writer of the Mary Poppins stories, has been pursued by Walt Disney (Tom Hanks, Captain Phillips) for 20 years to adapt her beloved characters to the big screen. When she finds herself struggling to maintain her finances, Mrs. Travers travels to California to the Walt Disney production complex to meet with Walt and a team of writers and composers to see if Walt will be faithful to her work and the vision of her characters. She doesn't sign her rights to her characters away, doesn't want sappy and snappy music, and forbids - above all else - any use of animation. Every swatch of cloth, every choice of a cast, every nuance of the story plot is a battle between Mrs. Travers and Walt's creative team. Can either side compromise enough to create a finished film?

We all know that Walt Disney Studios produced and put out Mary Poppins as a feature film. That could never come under dispute. What this film shows is the turmoil, both internal and external, that Mrs. Travers underwent while trying to rationalize why and how to bring her beloved nanny to the big screen. The film is aptly named, the P.L.Travers collection of Mary Poppins stories a reflection of her own youth spent at the end of the line in Australia. She idolized her father who held a strong grip on his own imaginative spirit. She idolized him as she was a kindred Celtic spirit. Writing Mary Poppins allowed Travers to pay homage to her father and to attempt to reconcile her own demons concerning family.

The story flashes between Pamela's youth in Australia around 1901, then moving forward to 1960s London, England and Hollywood, California for a fateful few weeks where the battle for Mary Poppins' future commenced. Moving back-and-forth, we catch glimpses of what P.L.Travers has been dealing with her entire life. What starts off as an author's catharsis by putting finger to typewriter ends up being a much larger realization when she is faced with the decision of letting go of her creations.

Emma Thompson is superb as the P.L. Travers. She is prim and proper, holding her values and creations in the highest regard. She is difficult to deal with and more difficult to read. Tom Hanks, as Walt Disney himself, plays the man behind the Mouse with ease and a childlike enthusiasm. He also holds his own values in high regard, as well trying to keep a 20 year promise to his daughters. Paul Giamatti (Turbo) plays Travers' chauffeur Ralph, bringing his own positive attitude to the aid of a difficult woman and situation. B.J. Novak as Robert Sherman and Jason Schwartzman as his composer brother Richard are both very professional when it comes to being the creative force to put Mary Poppins on screen. Both over-the-top and subtle, each gets their points across to the Mary Poppins creator. Colin Farrell who plays Pamela's father and Annie Rose Buckley who plays his young creative daughter have a chemistry matching their creative and imaginative spirits.

Semi-biographical, semi historical, and pulling source material from both archived recordings from the Disney creative team meetings and sketches and movie sequences from the Disney Vault, Saving Mr. Banks has an air of realism mixed with whimsy. As with all stories of this kind there is always embellishment and license, but this feels just right. As Mary Poppins herself would say to the author and her need for closure and letting go, a spoonful of sugar will make the medicine go down.
Posted by CHUCK I. at 6:12 PM