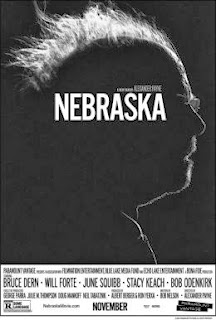 
SYNOPSIS:  An aging, booze-addled father makes the trip from Montana to Nebraska with his estranged son in order to claim a million dollar Mega Sweepstakes Marketing prize.

REVIEW: Alexander Payne, director of The Descendants, takes a script from Bob Nelson (The Eyes of Nye) to create a black-and-white tribute to a story of fathers and sons - and the things we learn along the way.

Woody Grant (Bruce Dern, Django Unchained) receives a letter in the mail alerting him that he's won $1,000,000 in a sweepstakes. He is found by the police department on the highway in Billings, Montana trying to walk his way to Lincoln, Nebraska to claim his winnings. Even though his wife Kate and sons Dave (Will Forte, Rock of Ages) and Ross (Ken Odenkirk, Movie 43) try to explain why the letter is not proof that he won anything, Woody will not be deterred. Realizing this, Dave gives in and agrees to drive his father to Lincoln in order to put a stop to his father's fantasy. Along the way Dave and Woody run into issues with Woody's health, as well as a costly and enlightening detour to Woody's hometown of Hawthorne, Nebraska.

Shot in black-and-white, Nebraska is a testament to good storytelling, character focus, and subtle nuances. Stripped down to its purest form the movie makes the audience focus on what is happening at the moment. Choreographed with gorgeous cinematography, like an Ansel Adams photograph giving the film a richer and weathered quality, every stationary or panning shot adds to both the beauty and sometimes the despair of America's middle.

More a character study of aging in America and the aging of America, Nebraska posts wonderful acting by Bruce Dern and June Squibb. Dern's Woody is the forgetful yet driven man who lives in a country where he had served his country, pays his taxes and should be over to do whatever how he wants to do. Squibb is a piece of work throughout the whole film, but shows she is not always the one at fault. Will Forte's Dave moves away from his roots in sketch and situational comedies to play a more down-to-earth and real character as Woody's son. Boasting only Dern and Stacy Keach as major stars, the film is filled with beautifully casted siblings and family members to make anyone from the breadbasket of America feel like they are at home themselves.

Bruce Dern's Woody represents a dying America that may not survive. All he wants is to feel like he has done enough to leave a legacy. Looking at small towns that Dave and Woody drive through on the way to Lincoln, Nebraska, you see that while homesteads from a man's youth may still stand, it doesn't carry the emotional way it should. The towns are dying and somewhat forgotten, paint peeling off the walls and columns, the dry leaves blowing through the streets and closed up shop of Main St., America. People who built this country are now left to slowly fade away.

The film is endearing as Woody strives to fulfill a life goal of leaving something behind. It also is very funny in parts with Woody and sharp dialogue between father and son, husband and wife, and sometimes no dialogue at all between several brothers who have lived a full life. Coming in at a little under two hours the film does seem a bit long. There's no doubt that Bruce Dern, Will Forte and Stacy Keach hold our attention and keep us engaged. That being said, some of the more artistic aspects of the film tend to go on for a little bit longer than needed. Shortening a film by just a few minutes would've helped.

An artistic independent film, Nebraska is worth your time. It's not necessarily big-screen fair but if you have the right ticket it may still be a winner.
Posted by CHUCK I. at 7:18 PM