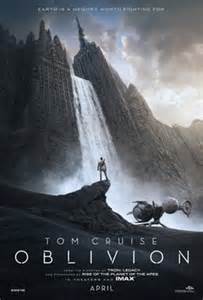 
The End of Earth

SYNOPSIS:  A veteran assigned to extract Earth's remaining resources begins to question what he knows about his mission and himself. 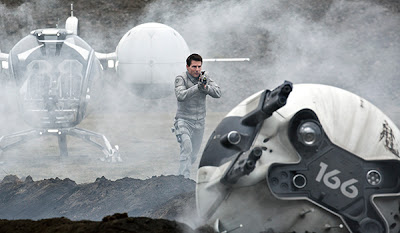 The world as we know it has ended. An alien race, called the Scavengers or Scavs, invaded Earth. The invaders destroyed the moon causing earthquakes and tsunamis across the planet. Whoever did not die from those clataclysms were caught up the nuclear war that followed. The last bastions of humanity beat back the Scavs and won the war, but most succumbed to radiation or hunger. Sixty years later, most of the remaining people of Earth have traveled off planet to the moon of Titan. Remaining behind on Earth is Tech-49 Jack Harper (Tom Cruise, Jack Reacher) and his communications officer and romantic partner Vika (Andrea Riseborough, Welcome to the Punch). The last remaining technicians on the planet, Jack and Vika work in tandem as Jack repairs roving drones against the backdrop of pockets of Scav marauders, and guard fission reactor stations sucking up seawater for energy off the coast. When a derelict spacecraft named the Odyssey crashes in zone 17, Jack goes to investigate against orders from Vika and Sally (Melissa Leo, Olympus Has Fallen) from Command originating from an orbiting space station named the Tect. Saving one of the survivors named Julia (Olga Kurylenko, Seven Psychopaths) Jack has moments of déjà vu of seeing her before. As Jack questions strange new memories, he must contend with renegade drones and aliens who are not what they seem. Can Jack unravel the mysteries of his own mind before Command relinquishes him and Vika from duty?

Oblivion is right in Tom Cruise's wheelhouse for his string of sci-fi action adventure films. Like Minority Report and War of the Worlds, Cruise brings his an extablished sensibility and tone to the film. Like Ray Ferrier, Jack Harper has a love for the long-gone sporting pastimes of America. Ray had baseball to try and bridge the gap between him and his son. Jack Harper wears a New York Yankees ball cap and remiesces of the 2017 Super Bowl in an attempt to bridge the gap between the world that is to the world that was. Like in Philip K. Dick's story that became Spielberg's Minority Report, the technology has a Apple device asethetic crossed with a late sixties/early seventies color palette. Add in Jack Harper's perchance to collect nostalgic keepsakes from his daily drone maintenance, and Oblivion is a literal walk down memory lane.

As Jack Harper goes about his tedious and relentless routine of repairing drones that are shot down or are defective, he finds that he is drawn to artifacts of a bygone era of when the earth still lived. From books to vinyl albums to sunglasses, Harper collects trinkets and items that trigger memories of the Empire State Building observation terrace in NYC from a time much older than he is. In spite of a mandatory memory wipe from the technicians on the orbiting Tect Command station, Jack still finds fragments of a life not his own. The discovery of a man named Malcolm Beech (Morgan Freeman, The Dark Knight Rises) and his armed sniper Sykes (Nikolaj Coster-Waldau, Mama) forces Jack to further reevaluate what he knows the truth to be.

One thing you can rely on Tom Cruise for in his action films is... a lot of action! Although little slow In its story and character development, Oblivion does offer beautiful aerials with Cruise in his bubble-styled maintenance craft and well-placed moments of tension with an expose Jack Harper standing off against remnants of the remaining alien Scavengers. The cinematography is beautiful and the CGI effects are slick and expertly crafted, with a number of great action sequences - from Jack's first on-screen encounter with the Scavengers to an extended aerial dog fight against rogue drones.

From the onset the audience can tell that something just not right about the situation that Jack Harper is in. For a while you just can't put your finger on it but something seems amiss. And that nagging feeling at the base of your skull isn't unfounded, leading both Jack Harper and the audience through a journey of self-discovery and rediscovery.

Coming in at just over two hours Oblivion is a bit of a commitment for sci-fi fans. Although the movie and the characters are always moving, there seems to be many lulls between the more kinetic action scenes. Whether the director was relying on the slick CG effects and the interesting post apocalyptic landscapes to visually stimulate and occupy the audience during the slower moments I do not know. At any rate, Jack Harper keeps moving as he figure things out for himself and uncovers something that's much bigger than just his role as maintenance tech 49.

Oblivion entertains, though it could have entertained in a little bit quicker fashion. With a light April season Oblivion may be one of the few films this month that does not disintegrate and disappear after its opening weekend.
Posted by CHUCK I. at 4:34 PM