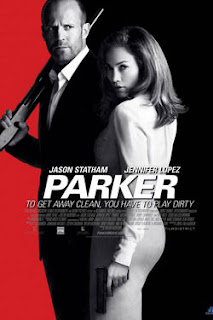 SYNOPSIS: A thief with a unique code of professional ethics is double-crossed by his crew and left for dead. Assuming a new disguise and forming an unlikely alliance with a woman on the inside, he looks to hijack the score of the crew's latest heist.

REVIEW: Ray and Proof of Life short director Taylor Hackford takes on the honorable thief Parker with the help from Black Swan and Hitchcock screenwriter John J. McLaughlin from the novel "Flashfire" by Donald E. Westlake writing under his pseudonym Richard Stark. 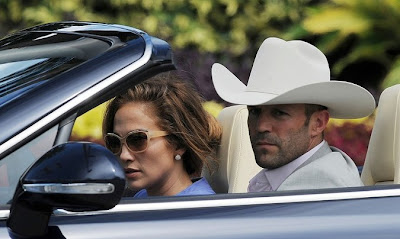 Parker (Jason Statham, Safe) and four others set a plan in motion to rob the ticket sales for the Ohio state fair. Although the plan is carried out and the team gets away with the loot, Parker is forced to choose whether to invest his fifth of the take to a larger scheme with the others or face execution. When he tries to just take his cut, Melander (Michael Chiklis,>High School) and the others draw down on Parker, shooting him and leaving him for dead. But Parker doesn't die... And vows to hunt down the men who did not live up to their end of the contract. Hunting the men across the region from Ohio to Louisiana to Florida, Parker poses as a Texas oilman and enlists the help of realtor Leslie Rodgers (Jennifer Lopez,What to Expect When You're Expecting) to ferret out where Melander and the others are hiding out in order to carry out their next score. All Parker wants is to balance the books concerning the agreement of the contract, and will stop at nothing to rights those wrongs.

Jason Statham is, in my opinion, an underrated action star. He has strung together a number of low cost franchise hits like Crank and The Transporter, as well as ensemble hits like The Italian Job and The Bank Job. Statham's rugged good looks and chiseled body are made better by his ability to carry out some great action sequences. And true to his history Statham does deliver on that point. A certain scene with a botched up "room service" to Parker's hotel room is probably the best action moment of the film. Parker and Melander's stand off is probably the second.

Parker is based on the novel "Flashfire" by Richard Stark. Jason Statham has the opportunity to turn this single film into another franchise. Unfortunately Jason Statham's presence in this film doesn't have the bite that it could have. Tom Cruise took Jack Reacher and made it into something different than the book and intriguing enough to spawn possible sequels. Whether it was the adaptation of the novel or the direction, Parker just doesn't seem to fully come together.

All the pieces were there. From independent contractor Melander, to his established team of crooks including driver Carlson (Wendell Pierce, The Twilight Saga: Breaking Dawn - Part 2), demo expert Ross (Clifton Collins, The Event), and Chicago mob boss relative August Hardwich (Micah A. Hauptman, A Bag of Hammers), Parker has to contend with some legitimate baddies. Throw when a hired assassin Kroll (Daniel Bernhardt, Creature) contracted out of Chicago to off Parker after-the-fact and you got some good elements. Add in a beautiful damsel in the form of Jennifer Lopez, whose character Leslie is desperate on all fronts, and you have even more intrigue. The problem is Jennifer Lopez' Leslie is too desperate to quick and Michael Chiklis' Melander and his gang seem to be a little over their heads in their ability to plan and execute all but the simplest of heists. Add in some weird voice over work for both Hurley (Nick Nolte, Gangster Squad) and general crowd conversation and you get just as many distractions as you get anticipation.

Some of the film blazes by pretty quick, especially the opening scene with the original heist that Parker is a part of. But as more pieces fall onto the board, and Jennifer Lopez is introduced, things slow down just a little too much and the pace falls off. Jennifer Lopez's characters back story is interesting but not to the point of being all that critical to the film. When she opens up to her client Parker during one of their house tours it just seems a little to forced and static. When Parker finally hunts down his quarry, the pace of the story speeds up to a reasonable speed again.

Parker has its strengths, and its weaknesses. Jason Statham carries himself with his usual charm and action presence, and Chiklis and the other baddies are antagonizing enough. The story, though, does not live up to expectations. Parker takes a lot of abuse, but the audience suffers a little bit, too.