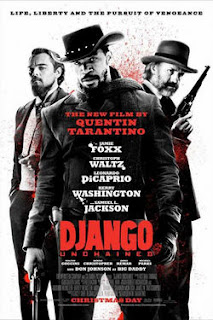 SYNOPSIS: With the help of a dentist looking for information on wanted men, a slave-turned-bounty hunter sets out to rescue his wife from a brutal Mississippi plantation owner.

REVIEW: Festival darling with Reservoir Dogs and Pulp Fiction, instant legend writer/director Quentin Tarantino has set the standard with his unique pulpy cinematic exploitation films. He continued with Kill Bill: Vol I and II, Grindhouse, and his history skewing Inglourious Basterds. What genre hasn't he properly tackled? It looks like the western is still fertile ground for Tarantino's unique touch. Writing and directing Django Unchained will surely add all of Tarantino's flair. And look, Quentin may finally get a chance to have his characters use guns! 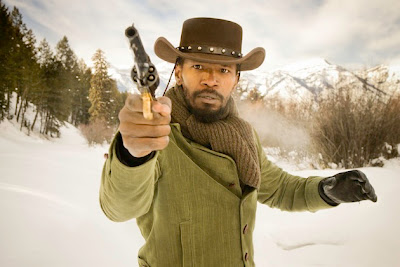 Dr. King Schultz (Christoph Waltz, The Three Musketeers) interrupts two slavers walking a group of newly bought slaves to their new owners. Schultz questions Django (Jamie Foxx, Horrible Bosses) about a group of three brothers who are wanted by the law, hoping that Django would be able to recognize these men if he were to see them again. Taking ownership of Django, Schultz and he ride through Texas and into Tennessee in pursuit of their bounty. Once their task is complete, Shultz offers to teach Django what he knows of the bounty trade and promises to help find to whom Django's wife Broomhilda (Kerry Washington, A Thousand Words) was sold to. Checking official documents, Schultz and Django uncover that plantation owner Calvin Candie (Leonardo DiCaprio, J. Edgar) paid for Broomhilda, and hatch a plan to buy her back.

Quentin Tarantino returns to the helmer's chair to offer us his version of the Wild West. Clint Eastwood may have had his day as the new modern western standard as The Man with No Name in Sergio Leone's spaghetti westerns, but Tarantino twists the genre around to give Jamie Foxx's Django a chance to create a new modern interpretation on the classic gunslinging motif. Bullets still fly, vengeance is still sought, and the real good guys do not have to wear white hats. Some of the classic visuals are still in play - the snow capped mountains in the distance, the silhouettes of horsemen trailing into a burning gold and magenta sunset, the long pan shots of men on horseback on a long trek, and the twitching fingers dangling an inch above a holstered six-shooter.

What Tarantino does in Django Unchained is what he does best. Growing up in the video rental shops, his love for exploitation films is still evident. From the bright red of the title sequence to the story-filling sing song of Django's ballad, you would think you were on set for a lost Shaft in the desert movie. Mixing classic western background music with 70s folk with current day rap, Tarantino uses all the right chords to convey his thematic western message.

Cowboys, bounty hunters, and even plantation owners, are a dirty bunch. Spitting onto anything but a spittoon, bathing one a month if one needs it or not - the trails are dusty and the bodies unwashed. Only the most beautiful are pulled out from the wretches, while the rest are sent to toil in the fields. Calvin Candie's Candie Land sits in the bowels of Mississippi, marble rising from the dirt like a pale jewel in a mossy grove of trees. Every character, from Candie minion Billy Crash (Walton Goggins, Lincoln) and family lawyer Leonide Moguy (Dennis Christopher, Deadwood), to house slave Stephen (Samuel L. Jackson, The Avengers) and Pinkerton-esque Butch Pooch (James Remar, Transformers: Dark of the Moon), has a layer of grit or the weight of the world on their shoulders.

The standouts of Django Unchained are Christoph Waltz's Dr King Schultz, Leonardo Dicaprio's Calvin Candie, and Samuel L. Jackson's Stephen. Sure, Jamie Foxx struts a mean rug, but I could listen and watch Waltz all day. Just like in Inglourious Basterds, Waltz mesmerizes with every stride and eloquent utterance. Dicaprio, as the power-hungry and vindictive slave and plantation owner, is as smooth and lethal as a near slumbering bear protecting its honey. His southern charm covers a simmering hatred for most things not his own. And Samuel L. Jackson, and Candie's head house slave Stephen, may be the most vile of them all. His "Uncle Tom" position may give him the rule of the homestead and the help while Candie is away, but his loyalties to his owner is only matched by his self-preservation.

Django Unchained is an uber-violent western effort from the mind of Tarintino - just as you would expect it would be. Funny, irreverent, clever, bloody, sometimes unnecessary, Django will not disappoint QT fans. Maybe not his best work from his canon of films, this western certainly stands out as a little more controversial than most.
Posted by CHUCK I. at 5:12 PM