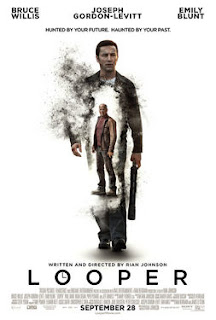 SYNOPSIS: In the near future, time travel is both possible and illegal, reserved for only the most influential crime organizations. In the closer future assassins called loopers kill and clean up the victims sent back in time for disposal. When Looper Joe is faced with 'closing the loop' on his own future self, he is forced to face the wrath of his employers and his future self bent on trying to save his own life.

REVIEW: Writer/director Rian Johnson, known for his first feature Brick and his follow-up The Brothers Bloom, reunites with his Brick star Joseph Gordon-Levitt for an attempt at a time traveling epic that turns the linear notion of history on its head. 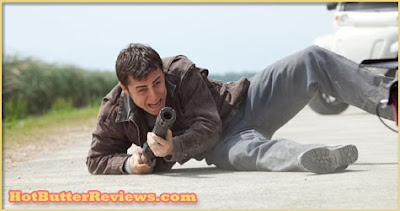 In the near future, Joe (Joseph Gordon-Levitt, The Dark Knight Rises) works as a killer, a Looper, for a local crime syndicate. A Looper is given instructions to wait at a specific time and place outside of the city to kill people who are sent from the future for elimination and disposal. Time travel has been created thirty years farther in the future, and immediately outlawed - only used by the most influential organized criminals. Loopers are paid by Abe (Jeff Daniels, Good Night, and Good Luck), who is from the future himself and sent back in time to create the Looper program for his bosses in the future. When Joe's fellow Looper Seth (Paul Dano, Cowboys and Aliens) realizes that he is about to 'close the loop' on his own future self, he learns that a mysterious figure in the future named the Rainmaker is dismantling all of the Loopers, and has taken over all of the organized crime rackets. When Joe faces is own experience of 'closing the loop' on his own future self (Bruce Willis, Red), the younger Joe fails to eliminate his older version. By not carrying out the assignment, younger Joe suddenly finds himself the target of Abe and his Gats led by Kid Blue (Noah Segan, The Brothers Bloom), and by the older Joe. Realizing that the older Joe is desperate to regain his life and wife by hunting down and killing the child who may become the Rainmaker, the younger Joe tries to both protect said child Cid (Pierce Gagnon, The Crazies) and his mother Sara (Emily Blunt, The Five-Year Engagement) and eliminate his future self to 'close the loop'.

The genre that spawns stories of time travel has a very fickle audience. Successful entries into its folds includes Gregory Hoblit's Frequency, J.J Abrams' prequel/reboot/sequel Star Trek, and Robert Zemeckis' Back to the Future. But for every perfectly scripted film, there are numerous others that miss the mark completely, either due to poor story or even worse execution. We could debate and go round and round about the dizzying effects of time travel, time-continuum, reality paradoxes, the cause and effect on concurrent versions of self, and more, but at the end of the day, the strength of these types of films hinge of the 'reality' of the physics being used.

When Seth's older self gets away from him and his blunderbuss, Seth faces the the wrath of Abe and his Gats for failing to carry out his assignment. In order to rectify the situation, Seth is slowly amputated a finger at a time, causing his older self to instantly lose the same digit or appendage immediately as an old scarred over wound. Using this fundamental space-time wrinkle of physics, writer/director Johnson sets the scientific stage for everything that comes after. Adding in references to discrepant cars with piping coming out of the tailpipes and dusty solar panels mounted on the hoods and roofs, massive over-population resulting in vagrant wars and destitution, a slick hovering future that still is not in the hands of the everyman, and a rampant development of low-grade telekinetic ability, Johnson paints a future that is not utterly bleak, but still has not solved the world's problems.

Bruce Willis continues with his capable, but dogged tortured man from the future, reminiscent of his performance in 12 Monkeys. Rian Johnson's go-to actor, Joseph Gordon-Levitt, plays the barely blemished mirrored version of Joe, perfecting the tone and manners of his older version. In the diner scene where the older Joe tries to explain what is at stake for the both of them, Gordon-Levitt as the younger Joe responds with a familiar gravelly whisper that could have been spoken by a younger Willis himself. Emily Blunt plays the protective and hurt Sara, her only job to protect and raise the young Cid. Pierce Gagnon, who plays Cid, steals his scenes with an innocence nearly lost. Noah Segan as the bumbling, power-hungry, approval-mongering Kid Blue is a successful source of comic relief and simmering danger, while his time-traveling boss Abe, played by Jeff Daniels, speaks in an authoritative softness that betrays a glimpse of the future that he knows all too well.

Joseph Gordon-Levitt is the driving force in Looper. While he and Willis share the burden of screen-time, Gordon-Levitt's square jaw, piercing eyes, and practiced mannerisms are proof that he is no longer the little kid from 3rd Rock from the Sun. Even through the slow parts of the film, Gordon-Levitt is wonderful to watch. Only Pierce Gagnon's Cid gives Gordon-Levitt a run for his money.

Looper is a slick, intelligent film that should please the genre audience. Only one moment of space-time uncertainty at the end distracts from the continuity of the story (but only the over-thinking theater goer will jump to the wrong conclusion), but the tale-telling is smart and cool. Gordon-Levitt narrates the story like Harrison Ford from Blade Runner, making me wonder what future actually came first.
Posted by CHUCK I. at 10:04 PM