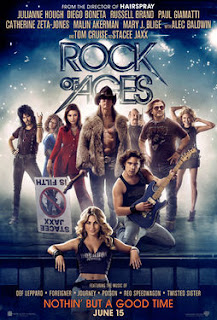 SYNOPSIS: A small town girl from Oklahoma comes to Hollywood to be a singing star, coming across a bar back boy with his own dreams of fame.

REVIEW: Adam Shankman, director of musical projects like Hairspray and Glee and choreographer on dozens of films, takes the popular New York Broadway and brings it to the screen with help from writers Justin Theroux (Iron Man, Tropic Thunder), Allan Loeb (Just Go With It), and Chris D'Arienzo from D'Arienzo's 2009 Tony Award nominated "Rock of Ages" for which he wrote the Book. 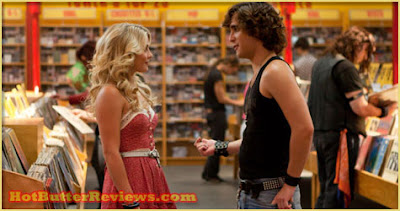 Small town girl Sherrie Christian (Julianne Hough, Burlesque) travels by bus from Oklahoma to the bright lights and big city of Hollywood, California to pursue her dreams of singing. She quickly comes across a bar back named Drew (Pretty Little Liars) who works at the legendary Strip establishment The Bourbon Room with his own dreams of singin' and rockin'. Both idolize the rock god Stacee Jaxx (Tom Cruise, Mission: Impossible - Ghost Protocols) and his hits as the frontman for the band Arsenal. Planning for an Arsenal show at The Bourbon Room by Jaxx's manager Paul Gill (Paul Giamatti, The Hangover Part II), Paul contracts with Bourbon Room owner Dennis Dupree (Alec Baldwin, 30 Rock) and his trusty sidekick Lonny (Russell Brand, Arthur) for Jaxx's last show before he goes solo. Meanwhile, politics play their part as Mike Whitmore (Bryan Cranston, Madagascar 3: Europe's Most Wanted) and his wife Patricia (Catherine Zeta-Jones, The Rebound) try to shut down the club and cleaning up the Strip by protesting the club and looking for any discrepancies in their books or practices. As the music and crowds heat up, passion ignites but runs on the rocks as fame gets complicated.

As a person who has not seen the New York Broadway show yet, I can only speak from conjecture and rumor about how the film was crafted in relationship to the Broadway show. From what I have heard, the role of Stacee Jaxx was moved from a minor subplot to a major main plot line for the film. I am sure there are others out there with more knowledge of the live show than me. That being said, let's delve into 1987 Hollywood as it appears on the silver screen.

Rock of Ages is at its beating heart a love story. Drew Boley and Sherrie Christian quickly find each other and their mutual hopes for a more glamorous and adventurous ascent into singing stardom. At first naive and hopeful, miscommunication and poor decisions force them apart in their own musical pursuits. In addition, Dennis Dupree and Lonny are in love with rock and roll, and the continued running of the Bourbon Room. Stacee Jaxx, typically drunk, full of himself, and able to alienate roadies and musicians as well as he inspires and entices the ladies, seems lost, lonely and looking for an elusive perfect song.

Rock of Ages is a fun, tune-filled journey down musical memory lane. Like its live show counterpart, the huge appeal are the songs from the decade of the 80s. Big hair, rubber brackets, and tight clothes are no match for the nostalgia of Def Leppard, Pat Benatar, Gun N' Roses, Poison, and more. Some of the best songs are the ones that are the product of a mash-up. Most notable are 'We Built This City' by Starship and 'We're Not Gonna Take It' by Twisted Sister. Mary J. Blige and Julianne Hough's duet of Quarter Flash's 'Harden My Heart' kicks as much butt as it tells a story. And that is the most important point of all. For good or bad, for seriousness or silliness, each song tells a story, fitting perfectly into the fabric of the film.

All in all, Rock of Ages is a toe-tapping delight with all of the music from my youthful formative years. The story is paced well, even for its 124 minutes length, mostly anchored down and hoisted up by the plethora of music - either sung by one or more of the cast or used as fill in the background. Conflict abounds throughout, starting with the union and breakup of Drew and Sherrie, and continuing with Dennis trying to combat both the lecherous Paul Gill and the vindictive Patricia Whitmore for the survival of the Bourbon Room.

Rock of Ages may or may not live up to the expectations that patrons of the live show may have. I liked the characters and story, and loved the musical selections and mash-ups. The film could have been balanced a little better with some more non-musical scenes, but for those who can appreciate the now classic music of their youth, this film is built on rock and roll! Don't stop believing!
WORTH: Matinee or DVD