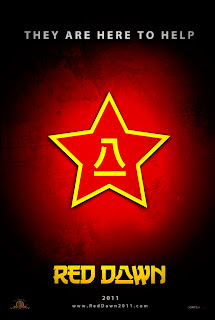 SYNOPSIS: The quiet town of Spokane, Washington is invaded by North Korean forces, putting the strategic location under Marshall law. Only a small band of high schoolers and a marine on leave escape and start fighting back.

REVIEW: Dan Bradley, long time stunt coordinator on such films as Crank and the Matt Damon Bourne trilogy and second unit director of films like Mission: Impossible - Ghost Protocol and Green Zone, steps up to the director's chair with the long-shelved remake of the 1984 Patrick Swayze and Charlie Sheen film Red Dawn. Carl Ellsworth (Disturbia) and Jeremy Passmore (Special) rewrite the Kevin Reynolds and John Milius story, exchanging Colorado for Washington and the snowy mountains for a more urban setting. 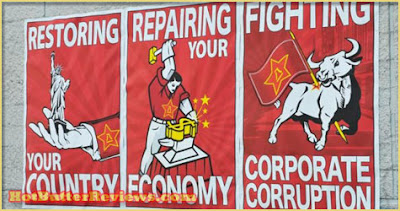 After six years in the Marines, Jed Eckert (Chris Hemsworth, The Cabin in the Woods) returns on leave to join his quarterback brother Matty (Josh Peck, Aliens in the Attic) and widowed sheriff father Tom (Brett Cullen, The Dark Knight Rises) in the Washington city of Spokane. One early morning, soldiers parachute from the sky and military vehicles and equipment rolls through the streets. Escaping in his truck with his brother, Robert (Josh Hutcherson, The Hunger Games), Daryl (Connor Cruise, Seven Pounds) and others, Jed evades the North Korean armies to their cabin in the woods outside of the city. Picking up other teen stragglers Toni (Adrianne Palicki, Legion), Danny (Edwin Hodge, Big Momma's House), and out-of-towners Julie (Alyssa Diaz, Shark Night 3D) and Victor (Julian Alcaraz, Haywire). Soon realizing that the invading armies will not just leave them alone, Jed and the others decide to take the fight to the North Koreans. Outfitting everyone in the group, Jed trains the boys and girls to be guerrilla fighters and sets them against the occupying forces in the city. Quickly becoming a nuisance to Captain Lo (Will Yun Lee, Torque), the prefect of the territory including Spokane, Lo makes it his mission to capture or kill the terrorists calling themselves Wolverines, named after the high school's mascot.

Director Dan Bradley takes several risks by taking on this film. The 1984 Red Dawn was the first film emblazoned with the MPAA's new PG-13 rating. For many, including me, Swayze's Red Dawn was an iconic film mixing a Brat Pack sensibility within the confines of a war drama. In the height of the Cold War/Reagan Era, Red Dawn was one of the last scripts to play on America's fear of the unknown entities behind the Iron Curtain. Swayze, Sheen, Howell, Thompson, and Grey were, or were to become, premiere young actors of their generation - my generation. And in 2009, the film started out with the invading force defined with the Chinese as the evil-doers. But as real world politics came into play in that year with the lending of money and support to the USA, it seemed that keeping the casting of the Chinese as the aggressors was a bad idea. Instead, the studio spent a million dollars to CG out the Chinese and CG in the North Koreans. A better choice, I think. What era did they think we were in, the Cold War? In 2009, North Korea and the Middle East were better villains than the Chinese.

With the risk comes rewards. Bradley takes the script from Ellsworth and Passmore, adds in his own expertise with action and created a relevant film with current ties to real world issues and fears. Communism is still a valid threat in today's world, but the fear of economist collapse is far more real and tangible and has affected many for citizens than McCarthy-ism ever did. The team keeps some of the conic scenes offered up in the original, including Jed staring out at the wilderness with the hood of his sweat jacket up, a classic scene with a fallen deer, and freedom fighters hidden in hidey holes ready to cut down the enemy. The rest the film runs a parallel line to the original plot, both subtle and obvious. The mountains of Colorado are replaced with the wooded hills of Washington state. The battles of the snowy plateaus are replaced with high rise office buildings and a more urban setting. In this version, the Wolverines take the fight to the enemy instead of the other way around.

In general, the story is the same. But the action sequences in the new version plays to the director's strengths. From the initial chase and escape in their Ford F1500 from the North Koreans to each insurgent act the Wolverines attempt and pull off, the 2012 version rocks the gun battles and fight sequences harder than the original. Gone are the 1980's cliche drawn out 'go on without me' death scenes in favor of the quick senseless killings that real war involves. From the fly-over of heavy transport planes dropping paratroopers, to an ending that does NOT involve a monument to the fallen members of the guerrilla soldiers, there is enough new and current content to satisfy the somewhat jaded reboot/remake-phobs.

All being equal, Red Dawn does have a couple issues. First off, the money spent on CGI to mask the Chinese into North Koreans works fine on flags, banners and military equipment, but fails to deliver when the characters, who originally were speaking Chinese with subtitles, are dubbed over with Korean with subtitles. Some may not notice, but I felt like the voice track was off as the words did not match the mouths they came from. Secondly, the enemy in the remake is kept, for good or bad, a more faceless villain. In the original, even the commanders had some heart. In the remake, they are just following orders without compunction.

Red Dawn (2012) is a relevant war drama tailored to the economic and electronic age. With great action sequences, a decent story, some humor, and a bevy of young, hot up-and-coming actors and actresses, this film may never become the iconic classic that the original was, but it is still worthy of a look if you like this type of film. Wolverines!!!!!
WORTH: Matinee or DVD