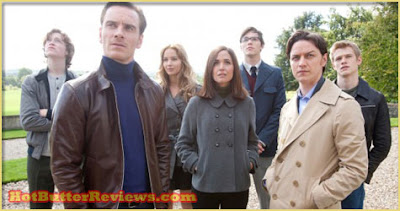 SYNOPSIS: Before they opposed what each stood for on mutant/human relations, Charles Xavier and Erik Lehnsherr were friends and worked together to set up a school for those with mutant abilities.

Before Wolverine joined the team, an entire generation of comic readers remained riveted to the origins of Marvel Comics' X-Men. Set in the backdrop of a semi-historical look of 1963 and the Cuban Missile Crisis during President Kennedy's administration, director Matthew Vaughn and a series of writers (including Bryan Singer) put to film something that Marvel Comics does so well - namely, the ability to interlace the fiction of superheroes and mutants with the realities of ongoing real-life events. Where DC Comics has the fictional Gotham City and Metropolis, the Marvel "bullpen" churned out story after story using the skyscrapers of New York City and the sprawl of the surrounding boroughs to bring us Spider-Man, the Fantastic Four, the Avengers, and a team of mutants living in a world that fears and hates them.

But avid comic reader and geek graphic novel historians beware! The 1963 team of X-Men in the film, although an origin story, has few parallels with the comic where a wheelchair-bound Professor X, Cyclops, Marvel Girl, Beast, Iceman and Angel battled against an already embittered Magneto. In X-Men: First Class, the only member of the original comic team is Beast (Nicholas Hoult), last seen in 2006's X-Men: The Last Stand, as an adviser scientist fur ball played by Kelsey Grammer. Mystique (Jennifer Lawrence from Winter's Bone) returns (can you return to an origin story?) as a younger self not yet completely loyal to the future Magneto bent on the domination over and the servitude of all homo sapiens. The rest of the team consists of Banshee (Caleb Landry Jones), an Irish lad Sean Cassidy with a sonic scream, Havoc (Lucas TIll), Cyclops' brother Alex Summers with his own barely-controlled concussive blasts, and Darwin (Edi Gathegi), a mutant with the ability to adapt for survival.

The relationship between Charles Xavier (James McAvoy) and Erik Lehnsherr (Michael Fassbender) is compelling throughout the film. Xavier's bright and sometimes naive expectation that mutants and mankind can coexist flying in the face of the beliefs held by Erik based on an upbringing of Nazi concentration camps, murder and experimentation. Lifting the Magneto origin straight from the original X-Men opener and expanding it is a reminder of how good Bryan Singer's contribution to the X-Men franchise is.

X-Men: First Class covers much ground trying to pack in lots of "Easter eggs" and faithful beginnings to the original set of films, some good, some okay and some that makes the audience giddy and hooting with excitement. The recruiting montage that Charles and Erik spearhead after the first use of a primitive Cerebro works perfectly, funny and captivating. The villain mutant Azazel (Jason Flemying) dispatches a building full of CIA operatives that would make Nightcrawler envious. Sebastian Shaw (Kevin Bacon) is a decent evil foil against the combined efforts of Xavier and Lehnsherr, but the references to Shaw's Hellfire Club are watered down to mere passing. And Emma Frost (January Jones) as Shaw's right hand telepath, although fashioned in plenty of White Queen attire for the comic geeks to drool over, is little more than diamond eye candy with plenty of screen time. The genetic scientist Moira MacTaggert (Rose Byrne) from the comics has been completely reworked to be a mid-level CIA spook, for better or worse.

X-Men: First Class has story, action, heart and levity, but ends up a little uneven. The original concept for a Magneto prequel by Singer evolved, like mutants, into a bigger story involving all sorts of furry and high-flying players. Although somewhat faithful to the X-films that come after it, the die-hard fans will certainly be offended by some of the liberties that the film takes over the comic source material, both in terms of chronological history and the spirit of the Marvel mythos that houses homo superior.

WORTH: Matinee or BluRay