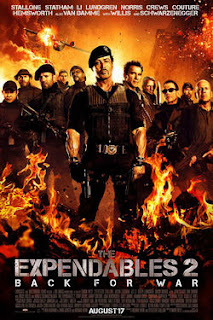 SYNOPSIS: Barney Ross and the Expendables are recruited again by Mr. Church for a job as payback for the previous mission they did not come through on. When one of their own is murdered, the Expendables seek revenge. 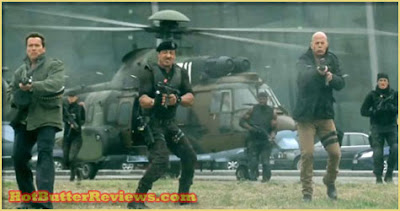 Barney Ross (Sylvester Stallone, Rocky Balboa), Lee Christmas (Jason Statham, The Mechanic) and the rest of the Expendables carry out a mission in Nepal to recover a rich Chinese business. Upon their return to the States, Mr. Church (Bruce Willis, REDS) confronts Barry about the five million dollars that he lost during Barney's previous mission for Church. Forced to carry out a retrieval mission for Church, Barney is also saddled with a new recruit named Maggie (Nan Yu, Speed Racer), who Church threatens bodily harm to Barney and the Expendables if she is hurt. Heading to Albania by plane, Barny, Lee, Gunner Jensen (Dolph Lundgren, Rocky IV), Hale Caesar (Terry Crews, Bridesmaids), Toll Road (Randy Couture, Setup), Maggie, and young ex-Army sniper Billy (Liam Hemsworth, The Hunger Games) scour the countryside for the wreckage of a plane with a special cargo that Church does not want to fall into the wrong hands. When Barney and his team do retrieve the special device, they are ambushed by a group of mercenaries named the Sant, led by Vilain (Jean-Claude Van Damme, Kung-Fu Panda 2). Forced to hand over the device to the Sant, Barry is given one more emotional blow when one of his Expendables is killed by Vilain. Vowing revenge against Vilain, Ross, Christmas, Maggie, and the rest of the team look to hunt down the Sant regardless of the consequences from Church or anyone else.

I remember when Stallone's The Expendables came out in 2010. What a nostalgic rush! A action flick with many of the greatest names of action from the 80s, 90s, and today on the same screen in the same darkened theater. It was an action geek's dream come true to see Stallone and Lundgren back together again (and on the same side this time). And even though Willis and Schwarzenegger were shown in the trailers, and we knew for certain they were playing characters in cameo appearances, we geeked out even more. Add in Jet Li, Terry Crews, and Randy Couture, and you had a hell of a top-billed mindless bullet- and blood-filled slug fest. Now, two years later, we get to add in Jean-Claude Van Damme as the villain Vilain and Chuck Norris as the lone wolf merc Booker to the character credits, with expanded screen time for both Willis' Mr. Church and Schwarzenegger's Trench. The expectation is that everything will be just that much bigger and better.

Heightened expectations may be one of The Expendables 2 main problems. With so many A-List action stars, there doesn't seem to be enough story for anyone. Willis and Schwarzenegger do get more screen time, but the time they do spend in front of the camera is primarily gun-toting money shots and cheesy one-liners. Hey, I am all for the cheesy one-liners, but they seemed expected and forced - only working half the time. And some (not all) of the action sequences are so silly that I was reminded of the Police Squad television series, or even the 80s Hasbro G.I. Joe cartoon. Mercenaries can't be that bad of shots with so much lead flying around. Hell! Even I can hit the heart of a paper target at fifty feet with a 9mm Glock 17! But while I complain about the gunfights, some of the more 'up close and personal' bloody and bone-crushing fight sequences are great. Jason Statham's knife play is excellent, especially when he dons the cleric's robes. Lundgren, Crews, and Couture make every shot count with their brawling prowess. And Van Damme shows that he still has it when the final showdown takes place between him and the pursuing Expendables.

Stallone remains the stoic reluctant mercenary who realizes too late that the life he chose is not the life he wants. At least he is good at it! Gunner and Yin Yang have made up so we do not get any team betrayals, and now that Lee Christmas has made up with his girlfriend, we do not get to see any Stateside ass-kicking. This time around all focus is on the mission and the villainy of the Van Damme's profiteering mercenary Sant leader Vilain and his lieutenant Hector (Scott Adkins, El Gringo), and what the Expendables are willing to do to stop them. There is plenty of bloody action and gun play to go around. The addition of Norris, Nan Yu, Hemsworth, and the expanded roles for Willis and Schwarzenegger fill the screen with plenty of action talent and multiple possibilities.

The addition of young blood sniper Billy the Kid by Liam Hemsworth and Nan Yu's Maggie does do something obviously different to the sequel. It makes the others look old! When Billy is told to take point by Ross he sprints up the hill with his ruck and weapon, leaving the others to wonder if they even had it in them to do the same. The writers, director, and actors are good sports about admitting that they are aging dinosaurs in a world of a younger breed. Their crankiness offers a few genuine laughs, especially when 'old married couple' Ross and Christmas nag at each other through most of the story.

The Expendables 2 is what you should expect from such a film. Lots of gun play, explosions, spraying blood, testosterone-filled quips and one-liners surround a lightly plotted story tying it all together. It is not necessarily better than the original, but it does continue in the same vein. Van Damme and Adkins are better villains than The Expendables David Zayas' General Garza in terms of physicality, but the quasi-political intrigue brought in by Eric Roberts' James Munroe and Willis' Mr. Church seemed bigger in scope in the original, if not bad-ass-ier.

The Expendables 2 will make some money from those who blood lust for bullets, blood, and all things action. Action movie junkies are a finicky bunch, but they have never let a cheesy story get in the way of a popcorn bucket and a mindless good time!
WORTH:  Rental